Interested in some online meetups? Come talk about it.

I have a question, but its more of a rallying call (more inside)
posted by sourbrew to Etiquette/Policy at 9:32 PM (19 comments total)
basically I want to start a website that allows people to harass major media corporations in the same way that political activist sites allow us to harass politicians. However, i don't really know enough about the sorts of database management this would probably require. I can out line this in much greater detail, but basically i wanted to ask mefites if anyone would be interested in donating time to help set something like this up.

Should i ask this in ask ? seems to me it would be deleted there, all though i don't really think this is the right place either, and projects is supposed to only be for things that are finalized.
posted by sourbrew at 9:34 PM on June 18, 2006

I would like to poke at major media corporations with a sharp, pointy stick. I'm not sure what value I could be to such a project other than my inherent loquaciousness, bombasticness and pontificaty words, but, there you go.
posted by loquacious at 9:39 PM on June 18, 2006

well not everyone need be a database wizard, although that would help up front. I think that having local "captains" who note that _________ Daily Herald completely ignored HUGE FREAKING STORY, and who have a tool box set up that allows them to contact other people in their region who can then harass in mass is a must.
posted by sourbrew at 9:45 PM on June 18, 2006

You should start small. Just create a basic HTML site with some form templates to print out and some addresses, or something like that. An actual usable project that could be posted to Projects. Then you can list all the features you want to add, and how you need technical help to add them, and see what happens.
posted by smackfu at 9:47 PM on June 18, 2006

If you have no technical skills and want to inspire others who DO have those skills, you should focus first on crystallizing your idea a HELL of a lot more than this. Sure, there are people out there who can help and may have the same politics you do, but give them a reason to care. A 4-line MeTa post like this, with no details about how the site would work, and without any detail about what makes your vision different, isn't going to get anywhere. You need to think things through more before you make a call to arms like this.

If, like me, you are cursed with a complete lack of programming talent, you need to fall back on the strength of your ideas. Think things through in detail and make your ideas REALLY STRONG before proposing them for assistance, like this. Engineers hate wasting their time on half-assed shit that hasn't been thought through.

I mean, really, let's say you build the site. What's your plan for getting people to visit it? Huh? Haven't thought about that yet? Well, welcome to the internet, where lots of stuff is going on all over the place. Either you have a very solid, creative plan or you are nowehere quick.

Sorry to be harsh about it. I am trying to present what I think is realism for someone in your position. How about a more specific mission than just harassing media corporations. How are you going to do that? You are missing the point if you think database skills are what you need.
posted by scarabic at 10:53 PM on June 18, 2006

I have very clear ideas about what i want the site to be, and how to promote it. You will notice that i said i could expand on it a lot more, but wasn't sure about where to ask about such things which is why i posted it to etiquette/policy, but since the cat is out of the bag so to speak here goes.

I have registered the domain ItsOurNation.com , I would like to create a website where a user can give out their email address / zip code. Users who are particularly interested in participating can become a captain or coordinator for their region.

The purpose of this database would be to maintain watch on both local and national press and provide a way for people to mass email, fax, letter write, and perhaps through distributed voip banks call their local and national media outlets to ask why certain stories were not aired, demand that they correct some erroneous facts, and in general keep a watch on the traditional media.

The press has become a 4th estate in this nation, and they have a lot of political power. Their treatment of the swift boat veterans is a classic example of a situation where a national narrative stripped a politician, John Kerry in this case, of credibility. To this end I think that a system based on similar plans used by moveon.org and other political action sites to hound representatives could be considerably useful in promoting journalistic integrity.

Finally a rating system could be used to keep track of both local and national media outlets, with direct links to their past faux pas and successes. The captain / coordinator for a given region would be charged with keeping an eye on local events, and then using a tool box provided by the site could contact his local affiliates to spur them to action.

There would probably be room for a forum, and a wiki in there somewhere as well.

Media Matters does some of this already but they do not offer direct tools on the site for contacting media, and are largely concerned with national press. I think that local press is an important part of the political process, and while i personally am no longer trusting of conventional media it would seem that a huge percentage of the population still relies on it, and we ignore that fact at our own peril.
posted by sourbrew at 11:07 PM on June 18, 2006

also, as far as driving traffic to the site goes there are plenty of good ways to do this, and I have a fair amount of experience at driving traffic to various sites. One of my sites gets around 17,000 visitors a day, and i would be able to utilize that as a jumping off point for advertising the site. However, trying to get involvement from dailykos, moveon.org, and media matters would be a great starting point for delivering more traffic. Also this is the kind of crap that boingboing loves to link, and a few action strategys aimed at drm, and internet rights activities would no doubt garner the support of eff.
posted by sourbrew at 11:16 PM on June 18, 2006

"Major media corporations" answer to two groups of people: advertisers and institutional shareholders. If you're not one of these constituencies, they can and will respond to your complaints by inviting you to engage in self-fornication. Mediamatters is a great site, but its purpose is to expose the biases of news organizations to the citizenry, not the news organizations themselves
posted by Saucy Intruder at 11:53 PM on June 18, 2006

please learn how to post inline images first. those imageshack bandwidth notices you keep posting are getting tiresome.
posted by quonsar at 4:33 AM on June 19, 2006 [1 favorite]

I'd suggest you get in touch with your local indymedia bunch. There are bound to be those who'd like to work on something more rigorous and effective and less a graffiti board for street people with more unfocused outrage than facts.
posted by George_Spiggott at 11:35 AM on June 19, 2006

quonsar, i love that by the time i get around to reading your comment the image is back up.

thanks to everyone with suggestions these are all good places to start.
posted by sourbrew at 12:32 PM on June 19, 2006

Media Matters does provide email and snailmail links to most places--i'd steal that info and code from them. ; >
posted by amberglow at 1:05 PM on June 19, 2006

i love that by the time i get around to reading your comment the image is back up.

except that's not what's going on at all - perhaps you think i'm being overly snarky, but you also need to learn about browser caches, and perhaps clear yours, so you see what other people are actually seeing! :-) 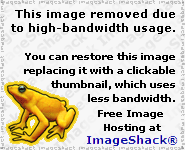 I have my own web server, i was just copying images off an animated gif thread because i was sure that thread wouldn't survive the night.
posted by sourbrew at 4:41 PM on June 19, 2006