Matt: Do you have a "watch list" like the Department of Homeland Security apparetly has? I mean a list of potential offenders in terms of breaking the MeFi code. Dumb posters like me. Do you look out for certain types of threads and within them do you purge threatening content? Do you profile? What does the "War On Terror" mean to MetaFilter in terms of spying stuff and administration people? Has George W. Bush's adminstration had an impact on MetFilter in a concrete way? Beyond NewsFilter have you been seriously pressured at any time beyond the five bucks? Sorry for the double query. has Karl Rove or his proxy knocked on your door?
posted by persona non grata to MetaFilter-Related at 9:46 PM (57 comments total) 2 users marked this as a favorite
png, if you haven't ever done anything wrong you have nothing to worry about.
posted by tula at 9:56 PM on August 11, 2006

Sometimes, watching out of of the window, MH wondered if he had looked up too much. At the sky, a stunned blue today; at the trees and their slow filcker.

Then he would look down to the task he had been given and sigh. Everything was there on that screen. People threatening to cut their hands off; people trying to stop other people doing people shaped things; stuff.

He called up the NSA data analysis program he had been given back in the beginning.

A moment of shocking darkness and then a dawning light, vast chunks of data being pushed into his head through that patchy green socket in his right temple.

And, as usual, the vast but vastly empty map of Metafilter. Shaped like pants, with a fish like thing inside.
posted by thatwhichfalls at 10:06 PM on August 11, 2006

I'm pretty sure I know the answer to this.

The secret is now out. Matt actually is a Rove proxy. All this time you thought he was a liberal who ran a forum where liberals could come and socialize with one another, when what he was actually doing was to collect information about all of you.

Sometime next week, all of you will be visited and will disappear to secret reeducation camps where you will be made into Republicans, whether you like it or not.

Metafilter has been one big Republican sting all this time. I, of course, am not in danger from any of this, but if I were all of you I'd be packing my bags and making plans to move to Toronto or Havana this weekend. (Havana is probably safer, now that the Conservatives have taken power in Canada.)
posted by Steven C. Den Beste at 10:47 PM on August 11, 2006 [2 favorites]

Jessamyn might. She recently retroactively deleted an innocuous comment that seven people had marked as a favorite, perhaps because she didn't want it on the favorites page, or because I had been critical of her moderation. Speaking of favorites, Matt, it's runners up, not runner ups. Mothers in law. Editors in chief. Personas non grata.
posted by weapons-grade pandemonium at 10:52 PM on August 11, 2006

Turning his attention once more to the flickering computer monitor currently illuminating his darkened room, Agent Howie saw once more that all too familiar alarm. But somehow, this time, he felt a sense of urgency about it.

Clicking on the 'Accept' button, Agent Howie (or 'How' as he was sometimes lovingly referred to by his friends at the Agency) found his suspicions concerned. It was Operative R himself, contacting him via video link up. "Fuck!" thought Howie. "This must be some serious shit! R doesn't contact mere agents like me for everyday run of the mill shit. What the fuck is going on?"

Trying to regain his composure, surely momentarily lost at the sight of his ultimate superior on the other end of the secure link-up, Howie addressed his one-time recruiter with all the respect his position deserved.

"Business and business only, Agent Howie" Operative R responded tersely. "Word has reached the agency's ears that your front for the invasion, this site you so quaintly named 'Metafilter', may have blown your cover!"

"I don't understand sir" said Howie in response. "The idiots who populate that site couldn't possibly have seen through our ruse. What makes you think they're on to us?"

"A post in MetaTalk" responded R. "By someone calling himself 'Persona Non Grata. He talks about a watchlist and he even knows about the profiling we do. At least he fell for that 'Homeland Security bullshit though.*"

"Thank Christ for that indeed!" said Howie. "Let me look at the post."

Swiveling quickly around in his chair, Howie switched on the darkened computer monitor which permanently monitored the activities and postings of several Mefites. And there it was, just as Operative R had said it was. Post #12501 in Metatalk was like a cold, icy dagger through Howie's heart. This 'Persona Non Grata' seemed to know far more than a dumb poster like him should know. Something had to be done, and it had to be done now.

The invasion of Liechtenstein would have to wait...

* See 'The Adventures of Agent How #24', wherein The Agency establishes The Department of Homeland Security' to throw several of the smarter MeFites who had clued into the possible existence of The Agency off the scent.
posted by Effigy2000 at 11:08 PM on August 11, 2006 [4 favorites]

Seriously? I don't know about mathowie or jessamyn (may their names be praised forever), but I have a shit list, and certain Mefi members do nothing to remove their names from it...
posted by muddgirl at 11:22 PM on August 11, 2006

Last I checked, Matt was human - which means that it's impossible not to form biases, get sick of people pulling the same stupid crap three times a goddamn day. But it's worth adding that the last time I checked, Matt tried damn hard to be fair.

Obviously, his success in that is going to be open to vast amounts of personal interpretation.
posted by Ryvar at 11:23 PM on August 11, 2006

Den Beste, your taste in anime sucks hard. Please find better shit to src in an img tag. Seriously, no one appreciates it. It's even less amusing than Rothko/AlexReynolds posting the "Drama Queen" gif for no reason for the 160th time. At least that was amusing at one point, and related to metafiter.
posted by blasdelf at 1:35 AM on August 12, 2006 [1 favorite]

Beyond NewsFilter have you been seriously pressured at any time beyond the five bucks?

I've been to the secret reeducation camps; where do you think I learned all those languages? The food is lousy, though.

perhaps because she didn't want it on the favorites page, or because I had been critical of her moderation.

haha, that's hilarious. Do you think either of us has the time to look at the favorites page or follow specific users around who have been critical of us, seriously? People fave off-topic jokey noise in AskMe all the time, the fact that something has been faved won't preclude its deletion, nor should it.

And, to the original question, there's no list -- at least I don't have one -- but we do have an idea who is getting flagged the most, both recently and over time.
posted by jessamyn (staff) at 5:55 AM on August 12, 2006

I think someone needs to step away from the keyboard. persona, go outside. Play in the sunshine.
posted by purephase at 6:05 AM on August 12, 2006

Sometime next week, all of you will be visited and will disappear to secret reeducation camps where you will be made into Republicans, whether you like it or not.

you can tell who the agents are ... they're all cartooney girls with cat ears and big anime eyes
posted by pyramid termite at 6:32 AM on August 12, 2006

He sees you when you're sleeping,
he knows when you're awake.
He knows if you've been bad or good,
so be good for goodness sake!
posted by blue_beetle at 6:56 AM on August 12, 2006

Remember that under Section 215 of the Patriot Act, if mathowie has been visited by our friendly FBI to gather information, he is prohibited from mentioning it.
posted by SenshiNeko at 8:19 AM on August 12, 2006

Remember that under Section 215 of the Patriot Act, if mathowie has been visited by our friendly FBI to gather information, he is prohibited from mentioning it.

/with a bullhorn just a few inches from your face
That is exactly why jessamyn's denial of keeping any of sort of lists is a lie. People! You fools! You are being watched by the site owner!
posted by NoMich at 8:40 AM on August 12, 2006

SenshiNeko : "Remember that under Section 215 of the Patriot Act, if mathowie has been visited by our friendly FBI to gather information, he is prohibited from mentioning it."

That's easy to get around, though.

Matt, please say "I have been visited by the FBI". If you can say that, it indicates that you haven't. If you can't say that, then clearly you have.
posted by Bugbread at 8:45 AM on August 12, 2006

Remember that under Section 215 of the Patriot Act, if mathowie has been visited by our friendly FBI to gather information, he is prohibited from mentioning it.

Also, I would tell you in a heartbeat; it would make a killer test case. The gag order has been getting a bit of a beatdown lately, w/r/t National Security Letters. I say "bring it on, FBI!"
posted by jessamyn (staff) at 8:56 AM on August 12, 2006

Mod note: which of course means that if mathowie has any sense at all he wouldn't tell me if he had a list either
posted by jessamyn (staff) at 9:02 AM on August 12, 2006

Matt, please say "I have been visited by the FBI". If you can say that, it indicates that you haven't. If you can't say that, then clearly you have.

I didn't think this would come in handy so soon. 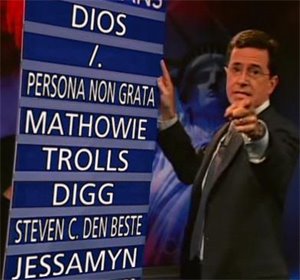 My thoughts exactly, yeti. But really, I'm not all that interested in seeing Matt's "On Notice" board. I'm far more interested in having a look at the "Dead To Me" list.
posted by Galvatron at 10:16 AM on August 12, 2006

Wow. Hooters in Japan is shitty.

So, that's pretty much what a Japanese suicide bomber would expect to find in heaven?
posted by Cyrano at 11:46 AM on August 12, 2006

Cyrano : "So, that's pretty much what a Japanese suicide bomber would expect to find in heaven?"

sonofsamiam : "No, an American nerd."

True. During WWII, I've got no idea, but if we're talking modern-day Japanese suicide bombers, he'd expect to find a line of blonde women with big tits.
posted by Bugbread at 12:26 PM on August 12, 2006

Cyrano : "So, that's pretty much what a Japanese suicide bomber would expect to find in heaven?"

sonofsamiam : "No, an American nerd."

bugbread: True. During WWII, I've got no idea, but if we're talking modern-day Japanese suicide bombers, he'd expect to find a line of blonde women with big tits.

Onto more important matters The Jesse Helms thank you.
posted by econous at 1:06 PM on August 12, 2006 I keep clicking that "fuck self" button but nothing happens. Maybe we should alllow form tags in comments.
posted by bob sarabia at 2:13 AM on August 13, 2006

From Jessamyn's link: An NSL also comes with the added bonus onus of never allowing the recipient to publicly discuss its contents, topic, or even existence.

I look forward to the days when Jessamyn begins to pre-emptively delete.
posted by raedyn at 7:45 AM on August 21, 2006